nO fiXeD aDdrESs is firmly rooted in a fleeting moment in the history of technology: a time when the answering machine held a certain frisson, the blinking light signified a singular connection; before the proliferation of toll numbers and sex hotlines; before cable tv and community access; when you might write down your contact info inside a matchbook (when bars had matchbooks... when people smoked in bars...) 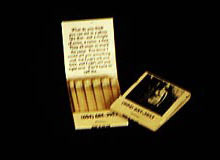 Distributed in bars throughout the city, usually mixed in with other matchbooks at the front counter - cashier.

The confessional quality of the recorded voice soothes the listener, alternately controlling the situation and then suddenly vulnerable and rambling with stories of a photograph found.

Other stories follow in rapid succession, urgently building one on top of the other. The listener’s position drifts between voyeur and participant, and they can keep the game going ... no one has to know you’re calling me... by dialing the next number and the next number and the next number after that. Analogies to social, psychological and theatrical conceits abound, but for the moment both the recorded voice and listener are in the game together, ... ok – maybe we should try to have a real conversation... with no time for analysis until later on.

On the fourth call, the work builds into a complex soundtrack, folding back into previous recordings until finally, overloaded, it breaks, ending abruptly with a straightforward description of the technology and a bemused invitation to continue the piece.

Thousands of responses were recorded each time the piece was presented.